Why companies are sick of their Word... 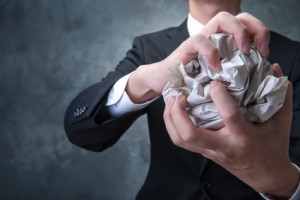 Word appeared in companies just over thirty years ago. Bill Gates, with Microsoft, included it in every office computer and made it the norm, sweeping away all other word processing software that was beginning to appear to replace the typewriter. Companies were heavily invested in training all of their teams on Word. At first, it was administrative teams, equipped with big office computers. Then, with exponential sales of lighter, less-expensive computers and laptops, it was the support staff and executives' turn. Bill Gates had achieved his dream: behind each office worker, each executive, there was a computer with his Windows office suite installed.

Word, the other side of the coin

This breakthrough technological transition left its mark on companies. Every new-hire had to know how to use the office automation suite, "proof" of his future effectiveness in the construction of documents and communication. Modes of operation and procedures were set in place to oversee the use of this software, which had become the norm. Employees quickly learned to transform the document by the "magic" of "copy/paste", disregarding copyrights, swept aside by the productivity and power of these tools. It took a few more years and a growing environmental concern to get the majority of people to agree to no longer print their documents on paper, storing them instead in Word or PDF format. Historically, the reference document was inevitably in paper format. Moreover, it was made up of pages, and each page would print out on a sheet of paper. The size of the document was measured in pages, in sheets. Because of this "paper" document mindset, companies quickly found themselves facing larger and larger volumes. They began by scanning existing paper documents to store them on hard disks, then servers, and today in the cloud.

A Word, or other word processor, alternative is needed.

From paper to granularity: technology changed!

Born of the need to store the digital version of a "paper" document, a document management system (DMS) meets the needs of companies that are now creating their documents directly in digital form. However, they continue to tabulate their documentation in pages, in reference to the paper print mode or in PDF format. Thus, Word and its portrayal of pages is still the norm. For thirty years. But technology has not stopped changing! Now all content must be broken down into little pieces, granules, that can be infinitely combined and modularized with each other. The content, independent of its media, can be divided, reused... in short, it is no longer possible to quantify a document by the number of pages it contains. However, we continue to preserve the paper portrayal of the document. Why is this attachment to the paper document, this reference to our past, so strong? The Word revolution, thirty years ago, turned the typewriter into an antique in a few years and led companies to change their way of working or risk vanishing.

Today, the groundswell that is driving companies to dispense with Word - for documents for which it is not suitable - is growing. This change is driven by two major engines. First, an increasingly sharp awareness of the productivity problems that this tool poses, which require long hours of "struggle" to achieve an acceptable result, as much for form as for monitoring data, updates or publishing in digital format. Secondly, the difficulty of disseminating content in formats other than Word... Since Word was created to produce documents in paper format to replace the typewriter! Web format did not exist at that time.

Changing the way you work: essential in a professional environment

Word alternatives abound. But no change can be made without agreement by stakeholders. For about ten years, publishers of solutions to produce technical documentation have offered alternatives to use implementing XML technologies, which were previously only available to the programming elite. However, these solutions are nowhere near as ergonomic as Word. And as Word is the reference, even if it's not always easy to use, anything that does not resemble it frightens users. Another undercurrent is also confusing the waters: the world of the Web and its simplified input interfaces to produce content by the kilometer.

Today, the NeoDoc company, at the crossroads of all these web, HTML, XML, XSL technologies, offers a structured publisher in Web mode or local mode under license. Simple to use, it finally allows writers of all stripes to write structured content, effectively and intuitively.

Quickly finalize its documents, instructions, user manuals, keep all of its supports up to date: a vital issue for companies that Calenco makes accessible simply and intuitively. Learn more.

A remedy for any company, even those of modest size, who are sick of Word!