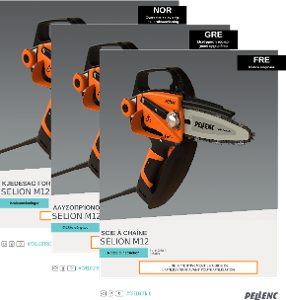 The PELLENC company, a French mid-sized company, manufacturer of professional portable electric machines, equipment and tools for the specialized agriculture sectors and the maintenance of green and urban spaces, has decided to rethink its approach to technical documentation. A change that was based on the choice of SaaS Calenco software, a structured writing solution developed by the French publisher NeoDoc. Why did PELLENC choose Calenco for the creation, editing and updating of its multilingual technical documents? How was the solution implemented? What were the main changes felt by the PELLENC teams?

PELLENC, portrait of an innovative French mid-cap company, leader in the viticulture sector

Created in 1973 by Mr. Roger Pellenc, inventor of the first pneumatic secateurs, the PELLENC company quickly expanded its activity, in particular with numerous ranges intended for the mechanization of viticulture. Today the company has 569 employees at the Pertuis site (84) and more than 1,840 employees worldwide, spread over 16 subsidiaries.

An innovative company, with a strong international presence

How to meet the challenge of technical documentation, faced with the consequent increase in the number of products and updates?

Exponential increase in the number of references, very frequent updates of specifications, translation of technical documents into some twenty languages, there are many reasons which have led PELLENC to rethink its production of technical documentation. A situation which eventually convinced general management. Changing methodology became strategic, opting for essential structured writing.

Collaboration with Calenco, a response tailored to specific needs

The PELLENC company quickly turned to the Calenco solution. This SaaS document production platform has been developed by the French publisher NeoDoc for ten years, to optimize the creation and distribution of strategic documents.

Calenco teams have put in place much more than a structured writing tool. They have developed, in close partnership with the PELLENC teams, a unique and tailor-made solution. Among its specific features, a single entry point to reinforce data reliability, the possibility of reusing fragmented content, and photo and visual integration functionalities, for total modularity.

The first documents affected by this new approach were the instruction manuals. These are the contractual documents that must be provided upon delivery of each machine. The need is then evaluated at around a hundred notices, to be translated into 15 to 24 languages, depending on the case.

Until then, the technical writing teams worked from InDesign, software that allowed them to create documents and decline them in each of the languages, via a system of layers. Each document is then edited in PDF.

It is also from InDesign that the editors had to make the updates, always more numerous, given the permanent evolution of the products in the catalog. Long and tedious work, sometimes perceived as demotivating for the teams.

The Calenco solution, a bespoke co-developed tool for efficiency

The collaborative aspect was essential in the development of the solution. The teams worked together to build a tailor-made tool corresponding to the specificities of PELLENC's activity. The Calenco project team was particularly attentive and responsive, with the establishment of dedicated contacts and an efficient follow-up service to respond to all questions as quickly as possible. Style sheets have been developed for compliance with the brand's graphic charter. According to Vandick Goncalves, responsible for the after-sales technical support department at PELLENC “The graphic possibilities are endless and it is even possible to develop your own style sheets, for more autonomy, thanks to the training provided by Calenco”.

The solution also had to integrate the translation component. Thanks to Calenco's partnership with Word Class, the publisher's long-standing partner, translations have been managed automatically in order to directly edit multilingual documents, without involving a change of tool to retrieve and integrate the translated texts. No more multiple layers in InDesign. Changes to documents, in each of the languages, can now be made and edited in PDF with just a few clicks.

The system also allows the intervention and validation of transversal services, such as the design office, methods or even marketing, facilitating cooperation between departments.

The agricultural equipment manufacturer does not intend to stop there in its use of the Calenco platform. The next step should concern the workshop documents, documents which are addressed to distributors, in particular for the after-sales service for which they are responsible. These documents are 500 to 800 pages long and relate to around sixty product families. Other departments may need to use the Calenco solution, the software used being different from one department to another.

The first point put forward by the PELLENC company when it mentions the benefits obtained by using the Calenco solution is the change of method. The Calenco solution made it possible to structure the approach to technical documentation, to adopt new procedures, to set up working groups on processes and operating methods. This has generated significant changes in operating methods: how to create a notice, how to understand the visual part, by including, for example, the design office. How to structure the visuals, how to homogenize them? All these questions have led to a form of professionalization of technical writing. And PELLENC is ultimately counting on a marked improvement in its efficiency. “The solution made it possible to change our working methods and the way we design notices”, said Vandick Goncalves.

The second point is managerial. The repercussions on the perception of the work of a writer, on the added value of the writing teams, are real. The work on the method turns out to be much more rewarding and much more interesting for the teams of writers. The time freed up by the efficiency gains in documentary production also contributed to improving the quality of the documents produced. A move upmarket in technical documents which goes hand in hand with the positioning of the brand.

“It is very satisfying to note that this new approach to technical documentation is accompanied by greater involvement of the writing teams. Switching from quantitative work to a more qualitative concept profoundly modifies the perception of each person's role and their motivation. And this is one of the aspects that is particularly close to our hearts.” declares Camille Begnis, director of NeoDoc.